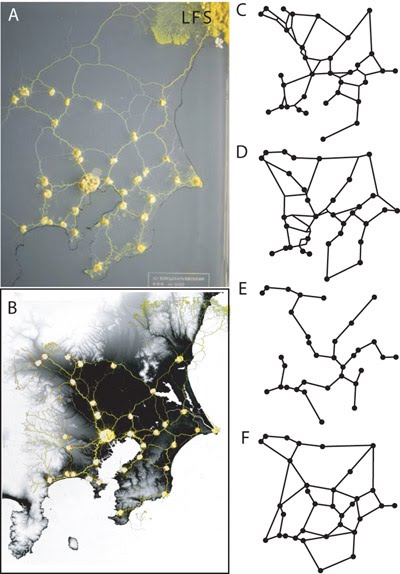 In [an] experiment, researchers led by Toshiyuki Nakagaki, of Hokkaido University in Sapporo, Japan, placed oat flakes (a slime mold delicacy) in a pattern that mimicked the way cities are scattered around Tokyo, then set the slime mold loose.After about a day, the slime mold had constructed a network of interconnected nutrient-ferrying tubes. Its design looked almost identical to that of the rail system surrounding Tokyo, with a larger number of strong, resilient tunnels connecting centrally located oats. “There is a remarkable degree of overlap between the two systems,” Fricker says.
The researchers then borrowed simple properties from the slime mold’s behavior to create a biology-inspired mathematical description of the network formation. Like the slime mold, the model first creates a fine mesh network that goes everywhere, and then continuously refines the network so that the tubes carrying the most cargo grow more robust and redundant tubes are pruned.

The behavior of the plasmodium “is really difficult to capture by words,” comments biochemist Wolfgang Marwan of Otto von Guericke University in Magdeburg, Germany. “You see they optimize themselves somehow, but how do you describe that?” The new research “provides a simple mathematical model for a complex biological phenomenon,” Marwan wrote in an article in the same issue of Science.

source: wired.com
Posted by arshia at 11:02 PM No comments: 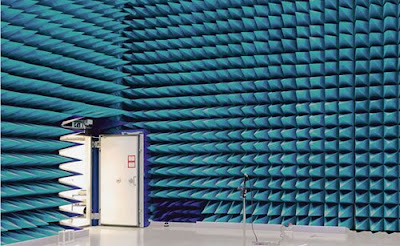 As our capabilities for understanding phenomena becomes more granular and fine and processing power enables us to accurately map them, we can quantitatively calculate and thus materialize an interface that mediates between these domains, one that responds not only to material systems, but to flows of asomatous phenomena (climate, Hertzian Space, economics, sound, affect and so on). Almost all trends in contemporary technology and science point to the development of ubiquitous and ambient models based on fine granulation. Examples are parallel in almost every field from the development of the genetic computation and fitness function, the Semantic Web (GGG) as a single global machine that is materializing from all the computing bits and tagged objects in the world, the design of implicit interactions and distributed agents[1] to finally the understanding that the universe is made of bits and it is storing and processing information in the quantum realm [2]

A physical structure -being the medium of architecture- forms spontaneously as these fine components try to meet energetic requirements and seek a point of minimal free energy.

In this respect the architectural form, moving rapidly from the tradition of being the node itself, operates in an in-between fuzzy mode, an interface that exists only by means of connecting the nodes in the global network of said phenomena.

[1] "The most profound technologies are those that disappear” “[they] weave themselves into the fabric of everyday life until they are indistinguishable from it.” The Computer for the 21st Century by Mark Weiser, Xerox PARC, 1991. He also coined the term Ubiquitous Computing.