Ultimately architecture -aside from its many growing implications in the sciences- and as the practice, is responsible for the physical definition of space, a definition that has invoked the notion of ‘performance’ and the tired utilitarian debate on the correlation of form and function. To move this debate on entirely, we should possibly "redefine ‘form’ not as the shape of a material object alone, but as the multitude of effects, the milieu of conditions, modulations and microclimates that emanate from the exchange of an object with its specific environment - a dynamic relationship that is both perceived and interacted with by a subject. Performance evolves from the synthesis of this dynamic(Hensel and Achim 6-11), the same way it evolves from the dramatic definition of the word in its theatrical realm. Once the perspective is shifted form the 20th century world view of dissecting the physical world into individual atoms to an understanding of interrelations, connections and ultimately to the architectures of ‘interface’ we can deduce that in a network society the interfaces between things matter as much as things themselves. With this perspective, theatrical performance, and screen acting in particular pose an interesting commonality with the performance of architecture in the digital age not only through an understanding of matter and form, but rather the emergence of substance through the study of complex behavior and those boundaries between systems that govern the condition of exchange between them. 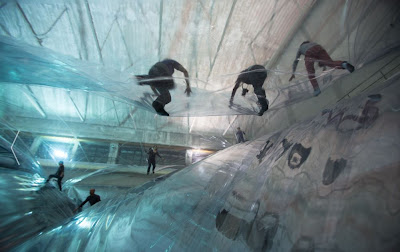 Hensel, Michael, and Mendez Achim. Versatility and Vicissitude: An Introduction to Performance in Morpho-Ecological Design. 78. London: John Wiley & Sons, Ltd., 2008. 6-11. Print.
Posted by arshia at 9:43 AM No comments:

Posted by arshia at 9:37 AM No comments: