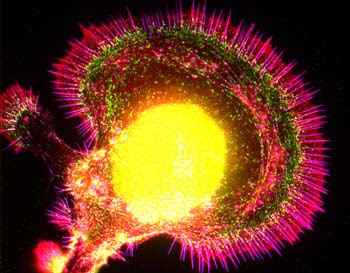 A sea slug neuron may tap quantum forces to process information. In humans quantum physics may be integral to thought.
Dylan Burnette/Olympus Bioscapes Imaging Competition
"Quantum physics may explain the mysterious biological process of smell, too, says biophysicist Luca Turin, who first published his controversial hypothesis in 1996 while teaching at University College London. Then, as now, the prevailing notion was that the sensation of different smells is triggered when molecules called odorants fit into receptors in our nostrils like three-dimensional puzzle pieces snapping into place. The glitch here, for Turin, was that molecules with similar shapes do not necessarily smell anything like one another. Pinanethiol [C10H18S] has a strong grapefruit odor, for instance, while its near-twin pinanol [C10H18O] smells of pine needles. Smell must be triggered, he concluded, by some criteria other than an odorant’s shape alone.
What is really happening, Turin posited, is that the approximately 350 types of human smell receptors perform an act of quantum tunneling when a new odorant enters the nostril and reaches the olfactory nerve. After the odorant attaches to one of the nerve’s receptors, electrons from that receptor tunnel through the odorant, jiggling it back and forth. In this view, the odorant’s unique pattern of vibration is what makes a rose smell rosy and a wet dog smell wet-doggy."

by Mark Anderson from the journal Discover - January 13, 2009

As einstein concluded his general relativity based on the hypothesis that the geometry of space explains further dimensions and oddities in the laws of classical physics, yet he was unable (and unwilling) to match his theory with the, then young, quantum mechanics theory. The M-theorists furthermore have tried to provide a link between the two theories by explaining phenomena in light of vibrations rather than matter. All this concludes the interesting relationship of geometry to spatial phenomena as non-static and quatumly viable.
Posted by arshia at 11:44 PM

Super Slots sports a simplistic website design that interprets properly into smaller screens. The site works properly and is straightforward to navigate, all on-line casino games can be found, however we find the dearth of extra filtering options somewhat bit annoying. Internet casinos supply numerous extras – deposit/no deposit/welcome, etc. It’s necessary to thoughts that|do not overlook that} to withdraw them, gamblers are to wager a particular amount. For instance, if the requirement is x20, it’s essential to wager 20x the bonus sum earlier than having a chance to withdraw winnings. Competitive gameplay – Many skill-based casino games supply competitive gameplay, permitting players to put their abilities to the take a look at against different gamers 바카라 around the globe.